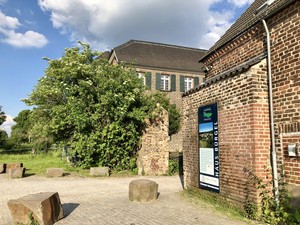 The non-profit association “Interessengemeinschaft Urdenbacher Kämpe – Haus Bürgel e. V.” was founded in 1989. Since then, its volunteers have worked for the preservation and proper use of the architectural and archaeological monument that is Haus Bürgel. The non-profit organization managed the property on behalf of the North Rhine-Westphalia Foundation for over 30 years, until its purpose was changed in 2019. It also ran the Roman Museum at Haus Bürgel, which opened in 2003.

In connection with the application for UNESCO World Heritage status for the Lower Germanic Limes, which will include the former auxiliary fort at Haus Bürgel, extensive modernization and reconstruction measures are planned. The tourism boost that can be expected as a result of UNESCO World Heritage status calls for a new, professional operator organization for Haus Bürgel. This new company was founded by the owner, NRW Foundation, and the town of Monheim am Rhein in early 2019 and bears the name “Gemeinnützige Haus Bürgel Betriebs gGmbH”.

This non-profit, limited liability company has operated and managed the house and the activities at the site since September 2019 and is also spearheading the conversion work. After its members voted to change its articles of association, the previous association in charge of the site – the “Interessengemeinschaft” – now has the new purpose of promoting Haus Bürgel. It now operates under the name